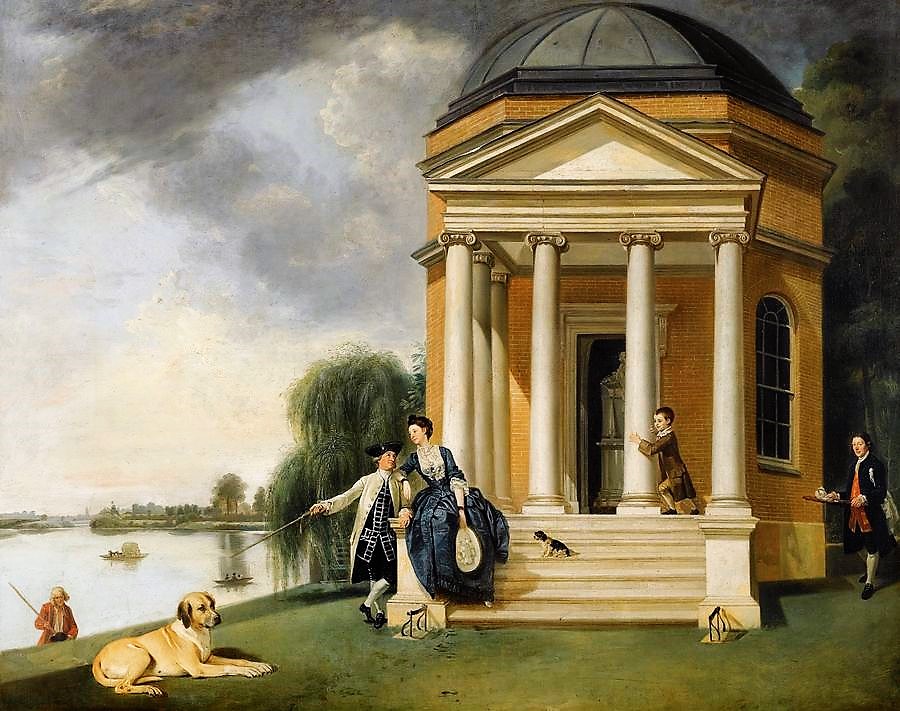 Johann Zoffany (1733–1810) The Shakespeare Temple at Hampton House, with Mr. and Mrs. David Garrick (and dog) 1762  Eva Maria [performing name Violette] (1724–1822), dancer, & David Garrick (1717–1779), actor & playwright, Garrick was perhaps one of the most famous men of his day & possibly the first true "self-publicist" & celebrity. An actor of skill & energy he transformed the 18C stage, revolutionizing not only theater production, but its moral & social status as well. He brought about a renaissance of the work of William Shakespeare, & his 1769 Shakespeare Jubilee, held at Stratford-upon-Avon, cemented the bard’s position as the greatest dramatist in the English language. Garrick, who had been tutored as a young man by Samuel Johnson.. His promotion of Shakespearean theater took on a more active role when he assumed the management of the Drury Lane Theatre.  In 1755, he commissioned the leading architect of the day, Robert Adam, to erect a temple in Shakespeare’s honor in the grounds of his villa at Hampton-on-Thames, for which he commissioned a life size marble statue of the bard from Louis-François Roubiliac (now in the British museum), visible here through the open doorway. In early 1762, shortly after the painter's arrival in Britain, David Garrick commissioned Zoffany to paint a scene from his play The Farmer’s Return, with Garrick himself in the role of the Farmer & Mrs Bradshaw as the Farmer’s Wife. Garrick invited Zoffany to stay with his family at their villa in Hampton-on-Thames in the summer of 1762, a privilege he did not extend to any other major artist, & it was here that the present conversation piece was executed. Garrick & his wife are set against the backdrop of Garrick’s Shakespeare Temple (designed by Robert Adam & erected in 1755-56 in homage to the great bard). Playing among the columns of the temple is a small boy, probably Garrick’s nephew George, the son of Carrington Garrick, whilst entering from the right a servant brings out a tray of tea.