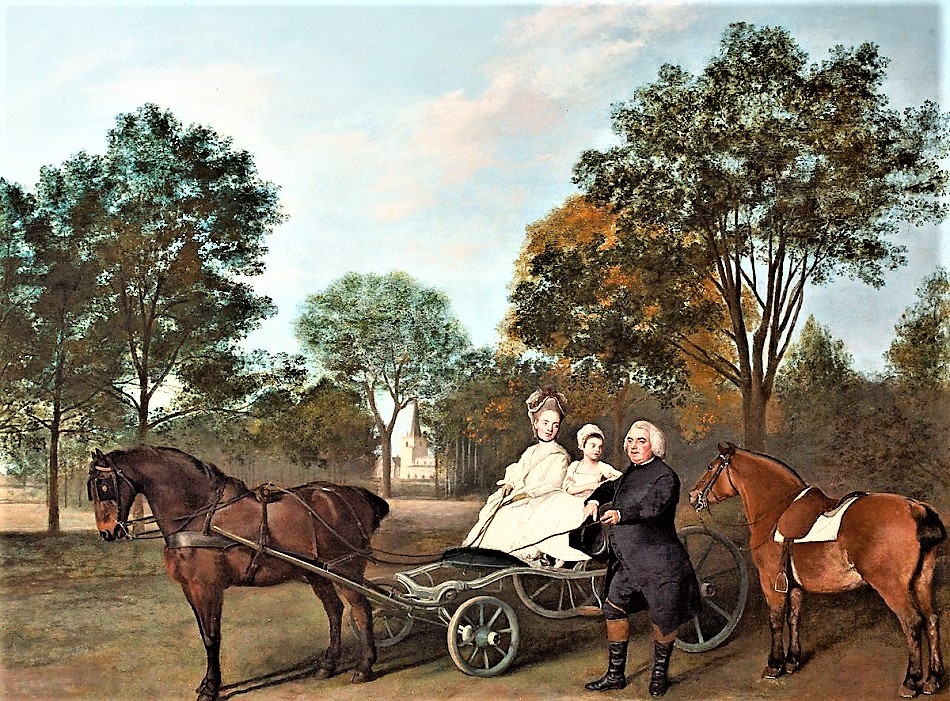 George Stubbs (1724-1806) The Reverend Robert Carter Thelwall and His Family.  Stubbs was classified in his lifetime as a sporting painter, & as such was excluded from full membership of the rather snooty Royal Academy. He is best remembered for his paintings of horses & his conversation pieces which also contained some fine horses. In the 1740s, he lived in York & supplied some intimate illustrations for a treatise on midwifery. He settled in 1750s Lincolnshire, where he obsessively researched his major publication, "The Anatomy of the Horse." Early clients for his sporting & racing paintings included many of the noblemen who founded the Jockey Club, & many who wished they were members.

Typically those depicted were members of an immediate family, but in-laws, friends & colleagues could be included; & sometimes, significant deceased relatives also appeared.  Occasionally, artists depicted organized gatherings of elite gentlemen discussing new science or scholarship. The settings of outdoor Conversation Pieces reflected the image the client wanted to present, especially the ideal landscape or more-natural garden, which he wanted to portray as the upper-class setting of his everyday activities.  And so, these Conversation Pieces are a great way to see what those in the 18C aspired to have in their planned, personal landscapes. The subjects of outdoor Conversation Pieces were depicted enjoying a variety of genteel pastimes, whether or not they actually could do the activities. Elites, aspiring or long-established, were painted sharing common activities such as hunting, fishing, outdoor meals & musical parties. Dogs & horses were also frequently included as proper gentry accessories.

Posted by Barbara Wells Sarudy at 4:00 AM

Blogging is a joy - a total extravagance, a chance to explore endless curiosities. Searching for WHY human society changes & what those living before us declare in their own words & in their design & images of themselves & of the world around them.
Focusing mostly om gardens & women, I put together several blogs, different in the particulars but similar in the essentials. They are listed in the blogroll below.