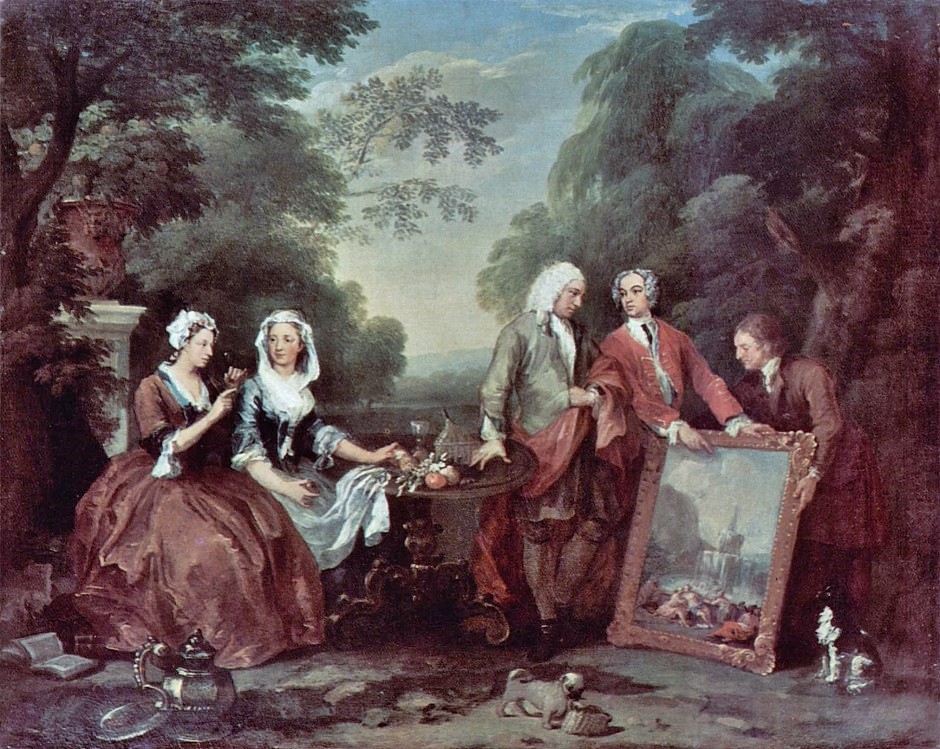 William Hogarth (1697-1764) The Fountaine Family. Examining a painting on the garden terrace.  And, of course, dogs are in attendance.

A growing, affluent middle class was emerging, as Britain’s colonial empire prospered in the early 18C, & its Industrial Revolution began.   Often socially spurned by established aristocracy, these newly-wealthy merchants, industrialists, & colonial landowners assumed more casual manners enlivening both novels & group portraits. These new portrait Conversation Pieces & novels, like Jane Austen’s Pride & Prejudice & Daniel Defoe’s Moll Flanders, attempted to portray a more relaxed narrative of the prosperous middle class rather than the stiff allegories & heroic epic poems preferred by earlier aristocrats. Painters were commissioned to hold a mirror to this emerging English society more intimately portrayed in still sought-after planned environments participating in activities expected of "natural leaders" at their elegantly country house landscapes.  No longer were families simply rather stiffly painted outdoors, as they were in the 17C, when budding science was promoting man as the "interpreter of Nature."  Now the newly-privileged yearned to appear in complex multi-figured compositions, filled with more relaxed representations of traditional, socially-proper customs & activities. The vibrant (& at times wholly fabricated) settings in these works reflect the aspirations of the emerging material culture of Georgian Britain.